Yes, this single hustlin’ female has been busy.  But busy is good.  Especially on the freelance front.

This past Saturday, I attended the book launch party of one of my clients who is a probate realtor.  In between deals earlier this summer — we met and began working in June — she decided to knock off one of her bucket list items and that was to write a book of her probate experiences to help those learn the pitfalls of the probate process.  Long story short, if you or anyone you know has any real estate property they plan on passing down to their kids, LIVING TRUST.   It costs between $700-$800 for a living trust, but up to $10,000  (maybe more) to go through probate.

All in all, I think her event was a success.  It was an invite only party, and she only had two guest not show.  Sold a few books, had a few guest speakers, live band, buffer style food.  It was very classy.  I was impressed. 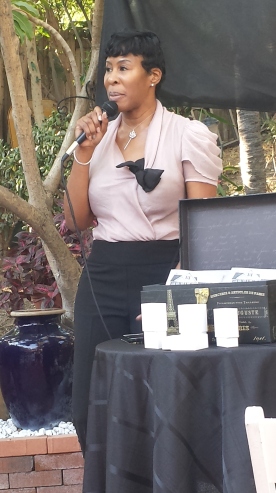 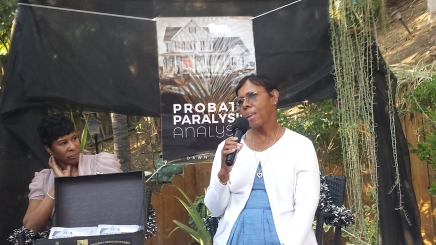 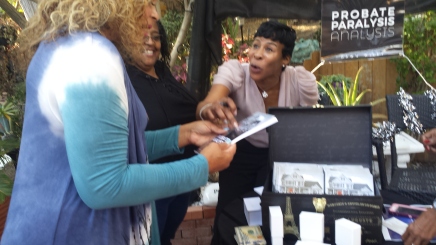 But that was Saturday.

From the party on Saturday, I was referred to another client.   Sunday, a prospect I later learned worked for Fox Sports reached out to me.  I found out Monday — yesterday — that the Secretary of State approved my application to become a Notary Public and I will be working on solidifying that for the remainder of the month.

And this just an overview of the past three days.

This single girl has been hustlin’, yes. So much so, I didn’t even have a sip of wine tonight! Blasphemy!

But my good and long time friend, Elle, sent me a photo of the bottle she was sippin’ on and I have no shame in posting what she’s drinkin’ without me. But in all fairness, the only reason she’s without me — I’m without her — she’s in North Carolina. Kinda makes meeting for happy hour a little hard these days, we’re working on it.

But she moved out there to do her thing, as she’s another female hustlin’ her butt off to elevate herself to where she wants to me. Kuddos to her.

And she has the most adorable boutique shop. She’s currently changing inventory right now, so when she has some new pieces, I will definitely share that and how she got her start as a boutique owner and into fashion.

No road to success that I know of is straight and easy. I wish it was, though! 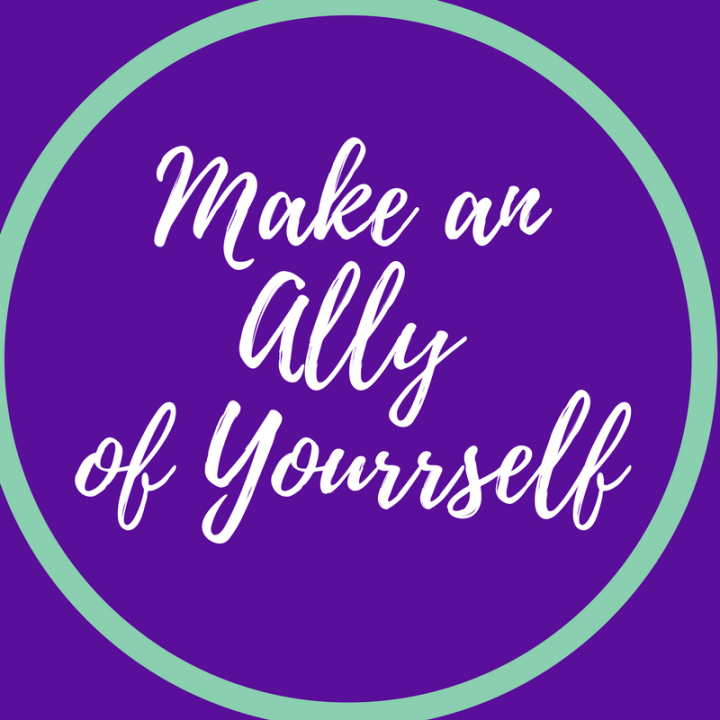 Of all the employment rejection notices/letters I’ve received, this has to be the best one:

Thank you for taking the time to apply for the Front Desk Assistant – Facilities Coordinator/Assistant position with COLDWELL BANKER RESIDENTIAL BROKERAGE COMPANY. While we were impressed with your background and experience, we have decided to move forward with candidates who more closely meet the needs of the role.

Once again, thank you for your interest in Realogy.  We encourage you to apply for future openings for which you qualify.

When I initially applied for the position, that was not the title.  Not even on the online application system was it ever referred to Front Desk Assistant.  Unless, they change the role.  I don’t know.  All of which is beside the point.  I love this rejection because it came after I sent Marybeth my own rejection letter declining to move forward.

The pay would be the same I’m making now, later hours and a longer commute.

I know many experts will tell you sometimes you need to take a lesser job to get your foot in the door.

Hon’, that’s what your side gigs are for.  Get to hustlin’ your foot in the door on that end.  Remember, you are an asset to their company/organization/ agency/ firm/ business and they would be lucky to have you.  You have more experience than any candidate they’ve interviewed because you got side gigs on your resume.  Show them.  And never accept less than what you’re worth.

When two loves come together.

Don’t ever let it be said that single women do not know how to cook.  That is a misnomer!  I was sent off the college making meals – not as a major, but to be able to know how to feed myself.  Being single just allows me to experiment more to my liking — and save money, too.

That’s one thing I don’t get.  Spending money on food that is nor not groceries — ingredients for meals you can make yourself — or the occasional night out.   Treating yourself to lunch or dinner out should be just that, a treat! But when you’re ordering breakfast and/or lunch every other day at the office (like one of my coworkers, Jonathan) that tells me one thing about:  you have no future!

Why?  People who are spending that often and that recklessly are not saving.  Or investing.  Or putting any of their extra monies toward professional and personal development.  How can they be?  They’re eating every available dollar!  I need big dreamers in my life, but I also need savers.  If you can manage your money, you probably can’t manage other valuable resources:  time, relationships, opportunities, etc.

Besides, who wouldn’t want come home and make these all on their own? 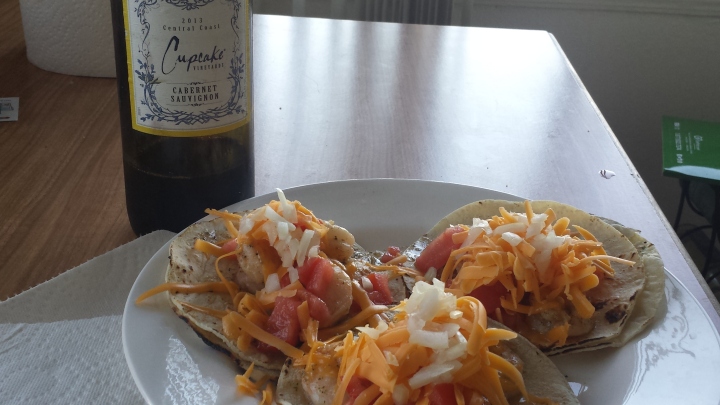 My version of shrimp tacos in honor of National Taco Day!   And of course, a bottle (not full, for the those quietly judging) of Cupcake’s Cabernet Sauvignon.  One of my favorite go-to reds.  Now, I don’t know if tacos and red wine go there.  And frankly, I don’t care.  I like it. I enjoy it.  That’s all that matters.  Plus, prep and cook time were like 15, maybe 18 minutes total.

*I would have loved to added avocado, but I was not in the mood to go to the store after dropping off my dry cleaning.

Serving:  4 tacos, 2 servings (and I ate both servings, no shame)

I cannot promise you your phone numbers will qualify.  All I can say is that I strongly suggest you check out the link below from Food & Wine online and see whether or not your phone number does qualify to be included in this Class Action Settlement.  If you read the details, the payout is anywhere between $300 and $900 (a few hundred dollars than you had a minute ago, right?)  However, the deadline is November 3rd.  That gives you about a month’s time to check to see if the number you have now or had once upon a time (for all you number changers out there) qualify to be included in this class actions settlement.

I don’t know when the settlement will close or how people can expect their payouts.  But never hurts to apply and find out.  After all, we’re all hustlin’ out here.  Claim every dime you can — save, invest and keep it movin’! 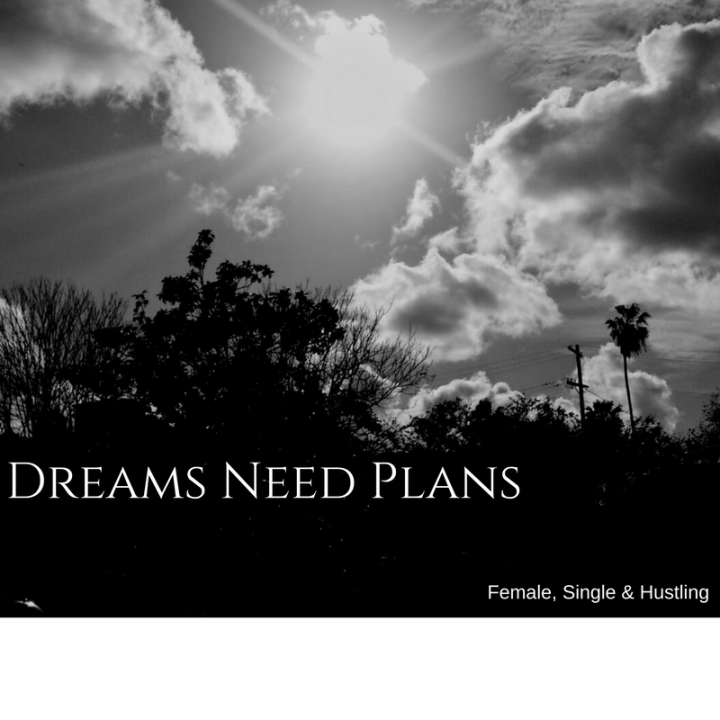 I got into freelance out of need rather than choice.  I graduated college in 2009.  A horrible time to make that kind of life decision.  No one was hiring, not really.  And although I had my bachelor’s degree, not one employer was looking in my direction.  When I applied for jobs, I was definitely all about that spray-and-pray method hoping someone worthwhile would see my resume — my potential, if that could be seen — and hire me.  Or at least, call me for an interview.

I did a get a few interviews, though.  To jobs I did not want.   Like those experimental marketing jobs.  Or those multi-level marketing insurance companies.  All of which were at 20 miles from home.  So, if I had committed to one of them, I would have to wake up a few hours earlier to ensure I was on the road on time to beat or manage along with the traffic to go to a job I would eventually quit.  Didn’t make sense to me.

Not going to lie, there were times where I had kind of figured what the company was really about in the waiting area or lobby, and would as discreetly as I could sneak out.  Of the office!  Of being interviewed.  I know it sounds foolish.  It felt foolish.  Y’know, why didn’t I just have the balls to tell them, “You know, this shit is not for me.  Sorry for wasting your time.”  But I didn’t.  I felt like I had to always yes to every opportunity and decline very cowardly what turned out not to be.

But even with me sneaking out of interviews while at the interview, I still needed money.  I had student loans to pay, car insurance, and this little thing I’ve been addicted to for a while — FOOD!  So, I climbed out of my pride and began to reach out to friends, former college classmates, family — anybody I knew who I thought could help me.   It started working.  Ish.  I got part time work.  No, not a job.  Work.

I worked for a friend of my grandmother’s who ran a daycare out of her home. I worked for a former high school English teacher of mine.  Doing menial or administrative tasks because they themselves did not have time to do it themselves.  Then a light bulb clicked in my head.  If they need these services, I’m sure others do too.   So, then came my own personal experimental marketing with Craig’s List, Back Page, Oogle, and a few other local online directories that no longer exist.

It was very hard in the beginning.  Finding the right words that would strike a cord with someone who would want to pay me.   Finding someone to pay me. But when it did and I got work, it felt great.  And I liked that feeling.  Of putting myself out there like a fishing line and getting a bite on my hook.  It became almost as addicting as food.

So I kept it at.  Changing my strategy.  Changing my services.  Freelancing has never fully paid the bills (oh, but one day it will), but it looked great on my resume.  And it later helped get me those little things I missing earlier after college — jobs!  So, since about 2011, I’ve been working and freelancing simultaneously.  And I love it.  With jobs taking away so much control and freedom due to “policy”,  it’s nice to have an outlet where you are the boss and your time really does matter and what you have to say and share always valued.